Looking for a Fight 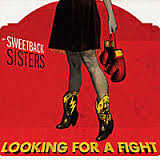 This week's slice of Americana comes courtesy of The Sweetback Sisters with a couple of tracks from their second album from 2011 Looking For a Fight.
Based in Brooklyn as opposed to the deep South they are actually a sextet with two co-lead singers Zara Bode and Emily Miller.
They are a sort of retro- country tribute act and to me some of their songs work and others don't.
For me these two work.A credible cover of a Dwight Yoakam classic followed by a song which has a touch of Freakwater about it

The Sweetback Sisters - Don't Put Her Down. You Helped Put Her There
Posted by Charity Chic at 08:00