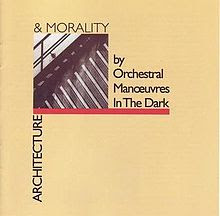 I picked up Architecture & Morality the third album from 1981 from Orchestral Manoeuvres in the Dark  recently for 95p in my local charity shop.
Unfortunately it came without the rather splendid outer sleeve designed by Peter Saville and Brett Wickens. Fortunately there is some of their work on the inner sleeve
As it was only the inner sleeve I initially thought it was a 12 inch single so it was a bit of a result when it turned out to be the album.
I've featured two of the three singles from the album Joan of Arc which made number 5 in the singles chart and Souvenir which got to number 3 which was the highest for any of their singles.

It would be remiss of me to feature this without  a reference to the legendary Half Man Half Biscuit and Architecture, Morality, Ted and Alice. Genius as always.

Orchestral Manoeuvres in the Dark - Maid of Orleans

Orchestral Manoeuvres in the Dark - Souvenir

Half Man Half Biscuit - Architecture, Morality, Ted and Alice
Posted by Charity Chic at 08:00