The Next Bob Dylan? 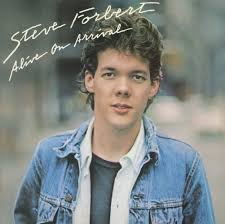 Steve Forbert is one of those artists who divides opinion. On starting out he was often compared to Bob Dylan (probably because he plays the harmonica on occasions) and has also survived comparisons with Bruce Springsteen.
I am in the pro camp and indeed there are four of his vinyl albums on the shelves all picked up I suspect in the sadly missed Echo Records on Glasgow's Byres Road. Having said that it is a wee while since any have had an airing.
He is still touring and regularly appears on the Renfrew Ferry
He predates Americana  so is probably best described as folk.
Here are the first and last songs from his 1978 debut Alive on Arrival on Nemperor Records

Steve Forbert - Goin' Down to Laurel

Steve Forbert - You Cannot Win If You Do Not Play
Posted by Charity Chic at 08:00