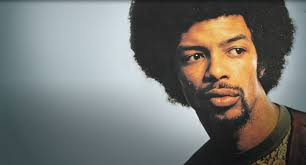 I felt a wee bit guilty the other week omitting Gil Scott-Heron from my Friday Three Name Series because of the use of a hyphen.
However the rules is the rules and you got fellow poet Linton Kwesi Johnson instead

So I thought I would make amends and sneak in some Gil today.His work spans soul, jazz and blues with liberal use of the spoken word with an argument that he was a prototype rapper.
Like Linton he was also a bit of a political activist as these songs will testify.

As I am Scottish, I feel obliged to pass on the bit of trivia that I suspect everyone knows by now - his father was the first black player to play football for Glasgow Celtic.

I suspect next week's soul offering may have a tinge of Christmas about it.


Gil Scott-Heron - The Revolution Will Not Be Televised