Merry Christmas From The Beach Boys 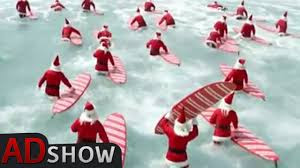 I'm not sure whether it is actually surfing weather at this time of the year in California. One thing is for sure, however, it will be a dammed site hotter than it is here
Sadly not the original The Beach Boys Christmas Album from 1964 but a compilation from 1990 entitled The Beach Boys Christmas Songs. The original was released following on from the success of Phil Spector's A Christmas Gift To You from 1963
Christmas Songs contains the same songs as the original but in a different order and I suspect it is not an official Beach Boys recording.It is certainly not listed in their discography.
Good tunes though

The Beach Boyd - We Three Kings of Orient Are

The Beach Boys -I'll Be Home For Christmas
Posted by Charity Chic at 08:00