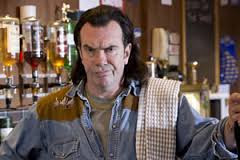 When I recently posted The Boatman's Call by Nick Cave and the Bad Seeds I commented that you rarely, if ever, see Nick Cave albums on the shelves in charity shops. All this changed last week when I picked by the eponymous debut album by his side project Grinderman.
If The Boatman's Call was at the mellow end of the spectrum Grinderman is as far removed as it is possible to be.
A splendid combination of scuzzy blues and noise terrorism.A band whose name describes their music perfectly.
Not for the faint hearted.
Released in 2007 Grinderman 2 followed three years later. The band made a brief re-appearance in 2013 so number 3 may well follow.