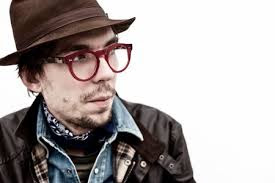 I think I've just about got my days back on track but with New Year rapidly approaching this may well be a temporary phenomenon.
With Steve Earle as his dad and named after Townes Van Zandt it was perhaps inevitable that Justin Townes Earle would grow up to be a musician and also as a person with major addiction issues.

I saw in playing guitar for his dad when he was in his early years. Steve commented that he was addicted to golf which was considerably more expensive than cocaine. That soon changed.
However, thankfully like his dad he eventually got his act together and has been clean since 2010
A song from his Harlem River  Blues album for you followed by Memphis in the Rain from his 2012 album Nothing's Gonna Change the Way You Feel About Me Now - taken from the Bloodshot 15 sampler which you can pick up for a small donation from Bloodshot.
This was his last record on Bloodshot with his latest two albums Single Mothers and Absent Fathers appearing on Vagrant Records in the US and Loose in the UK. A theme going on there I feel.