Such a Strong Persuader 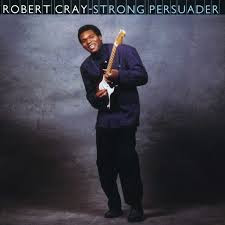 My reference on yesterday's Steve Forbert post got me thinking about Echo  and other lost record shops of Glasgow.
Echo is the forgotten name on the list and was indeed two shops adjacent to each other on Byres Road in Glasgow's West End.
A place where I spent a lot of time and indeed a lot of money (although the records were generally cheap) over a number of years
Strong Persuader by Robert Cray is another purchase from there. Or should it be The Robert Cray Band as written on the spine and on the label? I've opted for the latter.
His fifth studio album from 1986 it was critically acclaimed and was the one that saw him/them and bluesy soul briefly entering the mainstream.
But then again it was probably just another notch on his guitar.

The Robert Cray Band - Right Next Door (Because of Me)
Posted by Charity Chic at 08:00