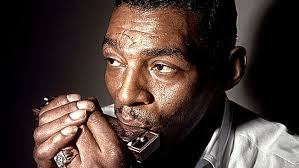 I recently revisited Stranraer. I did not come away with any Americana this time but did find three additions to The Blues Collection taking the total up to 43.
Today's offering is the only person inducted into the Rock and Roll Hall of Fame specifically as a harmonica player namely Little Walter or to give him his Sunday name Marion Walter Jacobs. Little Marion somehow does not have the same ring to it.
Born in 1930 in Marksville, Louisiana  (although other sources suggest he may have been born as early as 1925) he died aged 37 in 1968 in Chicago when his love of alcohol and fighting finally caught up with him.

Described as the king of post-war blues harpists he wrote a lot of his own stuff and also had a great voice. However I have gone for his versions of songs by Willie Dixon and Stan Lewis which have gone on to become Blues standards
Both recorded in Chicago in 1955 and featuring on the Boss Blues Harmonica album

Little Walter - Boom, Boom Out Goes The Light
Posted by Charity Chic at 08:00