Shoot Out at the OK Chinese Restaurant 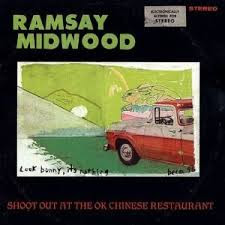 If you are going out for a Chinese meal tonight please exercise some caution.
Some more Americana for you today but Stranraer does not feature. Purchased in Glasgow and more than likely in the sadly missed Salvation Sounds in Shawlands Arcade.

Shoot Out at the OK Chinese Chinese Restaurant is the 2000 debut album by Ramsay Midwood. Available on the Vanguard label in the States but my copy is on the mighty Glitterhouse label from Germany.
I've not got much gen on him. He is from Texas I believe and clearly had some Bob Dylan and Woody Guthrie records kicking about in his youth.
I think that he has subsequently released another two or three albums.
I have never felt the urge to track them down as I would describe him as a bit one-dimensional - but in a good way.
I think I may have seen him play at Blackfriairs along with Randy Weeks

Ramsay Midwood - Spinnin' On This Rock
Posted by Charity Chic at 08:00