Not The Blues Collection - Louis Jordan 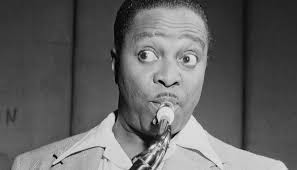 There is a Louis Jordan CD in The Blues Collection. However it is a live recording of a concert in Paris in 1973 when he is well past his best and it is almost vaudeville on occasions. So I will not subject you to that.

Rather you are getting a couple of his classic songs from a compilation series called The Golden Greats.
Is You Is Or Is You Ain't (My Baby) was a particularly popular sing-a-long song on the 806 night bus from  Glasgow's George Square to Clarkston in the early 80's along with Laurel and Hardy's Trail of the Lonesome Pine

My first inclination if asked to describe his music would by jazz or swing rather than blues. However the ubiquitous on-line font of all knowledge (allegedly) informs me that it is in fact Jump Blues - a swinging, up-tempo dance-orientated hybrid of jazz, blues and boogie woogie. So there you go

Louis Jordan - Is You Is Or Is You Ain't (My Baby)