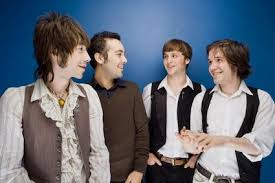 On the 7th of May 2005 at Glasgow's King Tuts I saw The Redwalls support and completely blow away Nine Black Alps.
On the strength of their performance I purchased their recently released album De Nova which I have previously featured.
Thereafter they completely slipped off my radar - remember this was pretty much pre Internet days.

Step forward to  14th February 2016 when  in the Shelter charity shop on Edinburgh's Corstorphine Road I happened across their 2003 debut Universal Blues.

The Redwalls -It's Alright
Posted by Charity Chic at 08:00