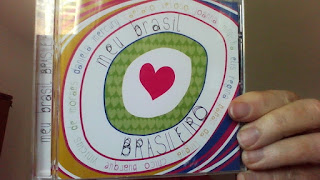 After last week’s calamity I am hoping for something better today. And a quick glance at one of the selections ensures that hope is fulfilled. And some! But first we’re off to Brazil with a cd called “Meu brasil brasileiro”, or “my brazilian Brazil”.  As opposed to “My Dundonian Brazil”? Or  “My brazilian- pictures enclosed”? Moving on…..I read the sleeve too quickly and somehow got it in my mind that this would be covers of famous songs done by brazilian artistes. Nope, it’s a collection of songs they (ie brazilians) bring to our (portuguese) side of the atlantic. One of the artistes is the fantastically named Fafá de Belém. There’s also a group called New Clothes (Roupa Nova) and what might be The Popes of Language (Papas de Lingua).

I’ve no idea what Elba Ramalho is warbling about but it is causing Parsley some distress judging by the tone of his bleats. After track 5 I’m wondering if this is a cd for people who don’t like music. There’s been warbling, a crappy duet that not even some fluting can enhance, but in amongst the forgettable supper-club easy-listening tripe are a couple of decent pop songs,

20 tracks on the cd. 17 are truly dire. Track 14 is the lowest point in the album, but the dogs seem to find it strangely soothing, they’re lying asleep about a metre from the speakers. It’s the Fafá de Belém track, if you’re interested. And track 19, by Joanna, is one that I recognised from another cd that featured previously, and, as you’d expect, made a needlessly sarcastic comment at the time. 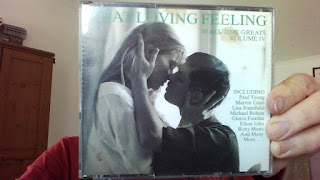 And now, an album that will yield the best song you hear today unless you then deliberately go off and play a song you consider better.     If you do this, post the song below to see if anyone agrees with you! And if not’s not Jungle Rock then you’re quite simply wrong). The (compilation) album must be one of a series called That Loving Feeling - The all time greats. This is volume 4. Mr Mizell will, of course, be on volume 1. Amongst the 30 tracks there’s not much to dislike, although there is one that will make you want to throw yourself off the nearest bridge, and some quite bland, but you could make a damned fine 10 song compilation from this compilation.

Jackie Wilson - I get the sweetest feeling

Another two next week. By the way, I broke my rule of listening to every track on the cds I pull out, skipping track 9 of disc 1. And there was no disc 2.

CC writes - George, can I just say that from the picture at the top that you are getting better at drawing!