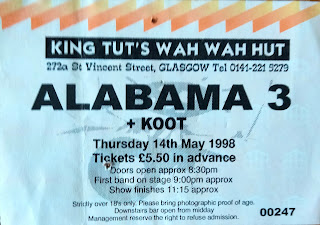 I was fortunate enough to see Alabama 3  at King Tuts when they were startitng out and before they became famous courtesy of Woke Up this Morning featuring as the opening theme to the brilliant TV series The Sopranos from 1999 onwards.

I had heard a couple of their songs on Radio Scotland and subsequqntly picked up a promotional copy of their debut album Exile on Coldhardour Lane from Vinyl Exchange in Manchster. The attached sticker gives notice of the release date of 17/11/97 and interestingly highlights the single Speed of the Sound of Loneleiness (a cover of the John Prine classic) as opposed to Woke Up this Morning.

This was enough for me to grab a ticket for a solo mission to their show at Tuts and what a terrific show it was too..Most,if not all, of the tracks on Exile featured and there was terrific interaction with the audience including a mock marriage on stage by the holy Reverend Doctor D.W.A.Y.N.E. Love first Reverend of The First Presleyterian Church of Elvis the Divine.

I subsequently saw them a few years later at the Carling Academy when they were riding high on the back of Woke Up this Morning.They appeared to be going through the motions and resting on their laurels and that show was very much a disappointment
A version of the band is still going but I wouldn't cross the street to see them. I only have La Peste from the myriad of albums they have released since but nothing  I've heard comes close to the debut. I'm glad that I saw them when I did.
Alabama 3 - Speed of the Sound of Loneliness
Alabama 3 - Mao Tse Tung Said
Alabama 3 - Peace in the Valley
Posted by Charity Chic at 08:00