It Came From Dundee ... All the Stuff and More 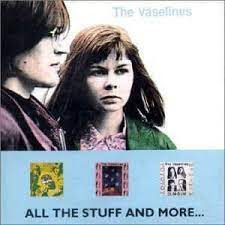 Initially my pal Euan sent me a couple of pictures of the CDs he got off his brother to see whether I was interested in any. All the Stuff and More ... by the Vaselines immediately stood out and I quickly baggsied it.
However when he got them back to his house and I got the opportunity to look at them in the flesh, so to speak, I couldn't find it and was convinced that he had snaffled it. After two or three looks it was spotted and I quickly grabbed it before he changed his mind.
From the seemingly endless conveyor belt of bands from Bellshill in the mid 80s the Vaselines were primarily Eugene Kelly and Frances McKee sometimes with assorted band members. They were on the go from 1986-89 then briefly in 1990 and 2006. They reformed in 2008 and are still going strong.
As the name suggests this was a Best Of complilation which was released by Avalanche Records in 1992 from songs originally recorded by 53rd & 3rd records.
Many of you will be aware that Kurt Cobain was a huge fan of the band and he regularly appeared wearing Vaselines T-Shirts. Nirvana recorded Son of a Gun, Molly's Lips and the renamed Jesus Wants Me for a Sunbeam  with Eugene Kelly joining them on stage at the Reading Festival in 1991 when they performed Molly's Lips

The Vaselines -Jesus Doesn't Want Me For a Sunbeam