Albums on both CD and Vinyl -The Luxury Gap 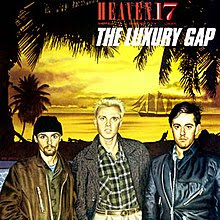 From 1983 on the Virgin label The Luxury Gap was the second album by Sheffield synth poppers Heaven 17. Nine songs  (of which 5 were released as singles) with a total running time of just 37 minutes and 21 seconds
A decent pop album but not as good as their 1981 debut Penthouse and Pavement which I only have on vinyl. I'm not sure of the reason that I have this in two formats and can only imaging that the CD was a cheap charity shop purchase even although I knew that I already had the LP.
The three gents featured above Martyn Ware (synth programming), Glen Gregory (vocals) and Ian Craig Marsh (synth programming)formed the nucleous of the band..This was their most succesful album spending 36 weeks in the UK albums chart peaking at number 4.
They released a further 6 albums with only 3 of them charting and it was a a fairly rapid downhill trajectory with the synth pop genre suddenly sounding very dated.
Sadly they are still trading their wares on the retro circuit
Heaven 17 - Crushed by the Wheels of Industry
Heaven 17 - Temptation
Heaven 17 - We Love So Fast
Posted by Charity Chic at 08:00