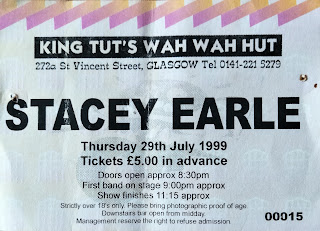 Did I go to see Stacey Earle purely on the basis that she was Steve Earle's sister? How shallow do you think I am?

Around about this time Stacey had two solo albums out or due shortly - Simple Gearle (she what she did there?) on her own Gearle Records in 1998 and Dancin' With Them that Brung Me on the same label in 2020. Therefore I would like to imagine that I had maybe heard something by her and was curious enough to find out more but I suspect that I would be being economical with the truth.

I could only find one song by her either digitally or physically namely Promise You Anything from 2000 which appears on the compilation O Sister Where Art Thou? I had to resort to You Tube to come up with a couple more to share with you.

It looks like her solo career was relatively short lived . She subsequently released another four albums with her husband Mark Stuart between 2001 and 2008. She also had her own band called the Jewels Both were members of Steve Earle's band so I suppose that technically means that I have seen her on more than one occasion.

Stacey Earle - Promise You Anything

Stacey Earle - Next Door Down