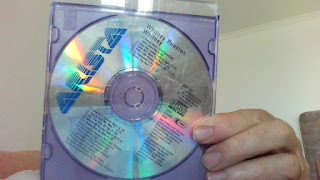 I am in temporary possession of one of the best-selling albums of all time. No, not Rumours (permanent possession), Thriller (ditto), Bat Out Of Hell (be serious, PLEASE!), but Whitney.It starts off with “I wanna dance with somebody”, a perfectly good pop song, and alternates with ballads and upbeat tunes until the final three ballads. I recognised one of said ballads, “I know him so well”, but it was the version  performed  by  Sir Elaine Paige (and Barbara “January February” Dickson also sang  on that, which I did not know).

I liked this track, one that was new to me. The cd has problems with some of the tracks, so here’s the video

It’s a surprisingly listenable album. I’ve played it twice before putting on the bird.scarer pile.

And now, Whitney Joins The Jams………..which would have happened if, say, I’d picked out a Strawberry Switchblade album then one by The Raspberries.. Thankfully this did not happen. Instead, what looks like a right load of old bobbins. My research about the next album led me to the “enciclopédia de cromos”, the encyclopedia of nerds, which is a blog. Anyway, Paulo has written a long article here   about the girl group ANTILOOK, who, contrary to the name, are 5 models who, on the back of the success of a particular genre of pop groups in Portugal in the late 1990s, formed their own group. I suspect some record company people thought that five extremely attractive and famous young women could be persuaded to make a record that would sell a shed-load of copies.

On looking at the album cover, my partner wondered if the woman on the left was holding her dress down because she had no knickers on. As soon as she said it I replied that “that’s going in the article”. And here is said album cover 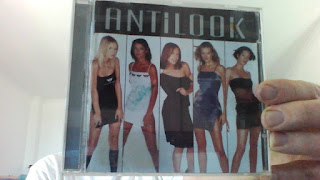 I am trying to work out why I like this record.  As you’d expect from a pop album, it’s very well produced, easy to listen to, most songs are upbeat…….but if it was Girls Aloud or All Saints I’d probably set fire to it. But it’s going onto my shelves, in the portuguese section as you ask, not the pop section.

Here’s my second favourite track, I think the Pearl-Butler style zoo-bee-doobies helps, but’s a hell of a catchy song:

This is a belting pop album, and has now been played twice, like Whitney, but is definitely a keeper, no swithering.

After those tracks it is now highly likely you’ll want more, so go to the link in Paulo’s blog above for that, and if you want your own copy of ANTILOOK’s album, it’s available at discogs for as little as €4.59. Apart from the music, singing lines such as “I want you to give it to me” and “you can shelter in my brisket” sound so much better in portuguese than english (although they might mean breast as opposed to brisket)

The group members are all famous, in Portugal  anyway,. One of them, Evelina Pereira had a brief role in the film Friends With Benefits.

You can read more of the “enciclopédia de cromos”, Paulo’s  blog about the 1970s 80s and 90s,  here. An ability to read portuguese would help, but if like Charity Chic, you’ve got far too much time on your hands you can paste it into an online translator to read.

(The Pearl Butler reference is to woefully tuneless singing)

Two decent albums this week. Can it last?

Readers - I think he may be mellowing