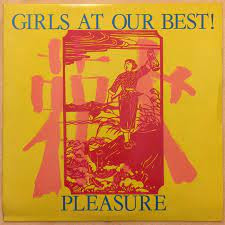 Girls at Our Best! were one of the many, many bands that passed me by at the time. A post punk band from Leeds they were only on the go from 1979-1982 releasing only one album during this period Pleasure on Happy Birthday Records in 1981 which reached number 60 in the UK albums charts.

I would have probably remained ignorant about them were it not for blogging where fortunately I have stumbled across them on a number of occassions.

Cherry Red have just released a de-luxe version of Pleasure consisting of 3 discs  - i) Pleasure plus Singles and Radio Sessions, ii) Live at Edinburgh University 02/11/81 plus demos and iii) Live at the Peppermint Lounge 06/11/81 bootleg.

It is probably more than you really need but it is good to see them getting some belated recognition.

Girls at Our Best! - Pleasure

Girls at Our Best! - Fast Boyfriends

Girls at Our Best! -Getting Nowhere Fast