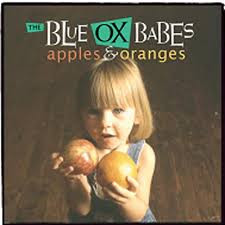 A week or so ago I noticed a couple of folk I follow on Twitter thanking Keven "Al" Archer for their free copies of Apples and Oranges by The Blue Ox Babes.
I did some further exploration and sure enough he was offering copies free and even covering the postage. I quickly popped off an e-mail and  a copy popped through my letter box last
Thursday.
If you are thinking of following suit I'm sorry to say you are too late as the stock of copies is now exhausted.
Kevin formed the Blue Ox Babes immediately after leaving Dexy's Midnight Runners in 1981. They inspired  the "Celtic Soul" image.
They recruited fiddler Helen O'Hara to play on some demo tapes and when Kevin Rowland heard them he recruited O'Hara  and  adopted a similar style leading to the release of Too-Rye - Ay in 1982.

The Blue Ox Babes signed to Go! Discs in 1988 and released three singles to critical acclaim but the album Apples & Oranges was cancelled after just a handful of promo cassettes were circulated.
Thankfully it was eventually released by Cherry Red in 2009 with some- non album B-sides and an unissued demo.

The Blue Ox Babes - There's No Deceiving You
Posted by Charity Chic at 08:00