Bible And a Gun 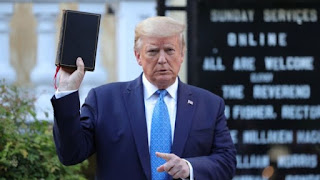 There have been some shocking scenes from the US on our screens this week following the death of George Floyd after a policeman knelt on his neck for eight minutes with another three policemen also involved.
The anger and the taking to the streets to protest against racism and police brutality was totally justifiable although the looting  slightly detracted from the cause.
Meanwhile the Toddler-in Chief emerged from his bunker threatening to mobilise the army before having protestors teargased to create a path to enable him to pose outside a church with a bible in his hand. It has somewhat backfired as it has not gone down at all well with many senior church leaders.

Given all the above the song which immediately sprung to my mind was Bible and a Gun written by Steve Earle a man who has no time for the likes of Trump and his ilk.
I've been unable to track down a version by Steve. Nor do I have the version by Jason & the Scorchers. Panic not as I have a version by Jason accompanied by Steve from his All Over Creation album.

Coincidentally the first track on The Unravelling the latest album by the Drive- By Truckers  also references a bible and a gun in the title.
This is an angry album full of fury about the state of America and the oaf in office.It is a protest album for our times and I wouldn't be surprised if some of the other songs appear on these pages in the not too distant future.

Jason Ringenberg (with Steve Earle) - Bible and a Gun

Drive-By Truckers - Rosemary with a Bible and a Gun
Posted by Charity Chic at 08:00