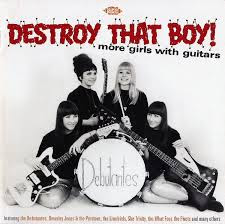 Destroy That Boy! -More Girls with Guitars  from 2009 on the Ace label is a sequel to  2004's Girls with Guitars
Twenty four tracks from girl bands from the 60's. I'll let Ace give you the blurb so that I don't have to.
A combination of covers and originals.
From a short list of about half a dozen I've narrowed it done to three with a caveat that I reserve the right to revisit it in due course.

The Termites were sisters Rita and Tina Layzell and Tell Me is a1965 cover of a Rolling Stones number. Not to be confused with The Termites a psychobilly band from Kilmarnock who may be familiar to Craig our Ayrshire correspondent. Must ask my brother if he knows of them.

The Liverbirds were an all -girl group from Liverpool (surprisingly) and were active from 1963-1968 making them one of the first all female rock'n'roll bands in the world and one of the very few in the Merseyside scene. Not to be confused with Beryl (Polly James)  and Sandra (Nerys Hughes). from the BBC TV  sit com. I can feel a Half Man Half Biscuit sing coming on.

The She Trinity were a Canadian/British act who rarely for the period all played their own instruments. One of their members Eileen Woodman went on to play keyboards with Billy Connolly and Gerry Rafferty in the Humblebums. Another member Pauline Moran became an actor and appeared on Agatha Christie's Poirot. Top trivia there

The Termites - Tell Me

The Liverbirds - Talking About You

She Trinity - Climb That Tree
Posted by Charity Chic at 08:00