50 Americana Albums You Should Hear Before You Die - Blue Notes 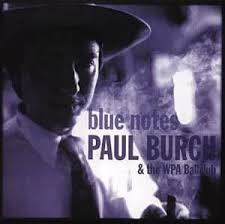 Some smokey stripped back Americana for you this week courtesy of Paul Burch & the WPA Ballclub with Blue Notes his third album from 2000 on Merge Records in the States and on Glasgow's Spit & Polish/Shoeshine Records in the UK.
Lots of pedal steel, slide guitar and a tight rhythm section.
Slow, sad and blue
I featured this over 5 years ago and I find it quite reassuring that I have opted for the same two songs this time round. Quality endures.
My previous post saves me raiding the ticket box by informing me that I saw him on 7th May 2001 in Glasgow's Tron Victorian Bar paying £5 for the privilege.My CD of the album was £5.99 and was purchased in Missing Records.
Up until now I was not aware that he was also a member of Lambchop at the time that this was released but we wont hold that against him.
He is still recording and has released 14 albums to date.
Shockingly none of the other ones are on the shelves apart from a copy of 1998's Wire to Wire with what looks like George's scrawly handwriting on the cover.