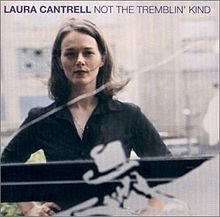 Laura Cantrell's first two album Not the Tremblin' Kind (2000) and When The Roses Bloom Again (2002) both on the Spit & Polish/Shoeshine label are both absolute must haves.
However one of the rules of this series is that only one album per artist can feature and after a fair bit of soul searching and mind changing I have come down in favour of the debut album as you can see from the picture above
Indeed it is hard to argue with an album which none other that John Peel declared was his favourite album of the last ten years and possibly my life
Three songs from the album made Peel's Festive Fifty for 2020
There are some terrific songs on that list and  another couple of artists on there may feature in this series in due course.


There isn't a duff track on the album and any of them could have featured.
Having said that you will not often come across three songs in a row as good as 5 - Two Seconds (written by Robert McCready) 6 - Churches Off the Interstate (written by Laura) and 7 - The Whiskey Makes You Sweeter (written by Amy Allison).
As an added bonus my copy is signed by her from the time I saw her play in Glasgow's Ramshorn Theatre which is a lovely old church
Did I saw it's a must have? If you don't have this album in your life you really need to catch yourself on.

Laura Cantrell - Churches Off The Interstate

Laura Cantrell - The Whiskey Makes You Sweeter
Posted by Charity Chic at 08:00