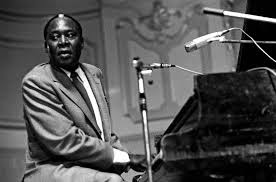 My recording system for The Blues Collection has once again reaped dividends.
I got a text from Mrs CC who was out with her mum quoting some numbers and asking me if I had them.
A couple of texts and a phone call letter I was able to confirm that I  didn't have 3 of the 5 or 6 that she had stumbled upon and they were duly purchased.
One (number 13) was Beer Drinkin' Woman by Memphis Slim.
Not the name that the pianist was born with , that would have been John Len Chatman although his compositions are listed as Peter Chatman which was his father's name.
Born in Memphis in 1915 his career spanned around half a century before dying in Paris in 1988 aged 72.
The first song Late Afternoon Blues was recorded in New York in January 1961 with the album's title track being recorded in London in 1960.
As you will hear he enjoyed spinning a story with a piano accompaniment..

I'm sure his name features in a Bob Dylan lyric but I could well be wrong there.