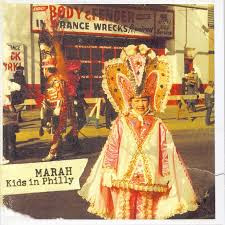 One of my pals was recently in Philadelphia on business. Another had previously visited there and they began to compare notes on our chat forum.
As is always the case it descended rapidly into nonsense with some musical references such as The Streets of Philadelphia. By the time I got round to referencing Kids in Philly they had moved onto New York!

Marah's second album had always been on my radar but I had never got round to acquiring it. This spurred me on and saw me investing some of my Grand National winnings on a copy.

Described by The Independent as sounding like Springsteen if he'd been brought up by the Replacements something which will have Adam in a bit of a quandary. I can hear a bit of the Drive-by Truckers in there as well.
All of which has  left me wondering what took me so long!

Marah - Faraway You
Posted by Charity Chic at 08:00