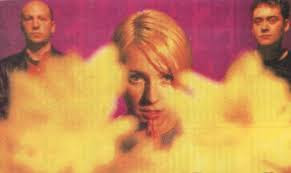 Disgraceful was the 1995 debut album by synthpop band Dubstar on the Food label. The original album cover caused a degree of notoriety as it was thought to resemble a part of a ladies anatomy. It was later revised to resemble a bunny rabbit slipper.Those of you interested can explore for yourselves.
All of which detracts slightly from the music. You will  all I'm sure  recognize Stars (number 1 in Israel) . I have previously featured  the Not So Manic Now (number 2 in Israel) another well known single from the album.
There are inevitably comparisons made with St Etienne - dance friendly indie pop by a band with three members - two blokes and a female lead singer called Sarah ( in this instance Blackwood as opposed to Cracknell).
There were a further two albums but this is the one I suspect which might feature in the top 50 Greatest Britpop Albums in the World .... Ever over at The Sound of Being OK

Dubstar - Just a Girl She Said
Posted by Charity Chic at 08:00