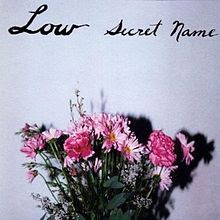 I didn't post my third and final charity shop Record Shop Day purchase last week as it is broadly similar to the first one, Iron and Wine , and let's face it you can have too much of a good thing. I'm pretty certain that they were handed in by the same person.
Secret Name is the  1999 4th studio album from Duluth, Minnesota  band Low. If you are familiar at all with the trio - husband and wife Alan Sparhawk and Mimi Parker with revolving bass players  with Zak Sally doing the honours on this one - then you will know what to expect.
Gentle whispered vocals , a slow tempo and minimalist arrangements but perfectly capable of upping the volume if the mood takes then.
Not on these two tracks however which are from the slow tempo, minimalist school. Perhaps surprisingly so in this instance given that it is produced by Steve Albini.

Low - Will The Night