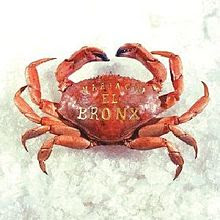 A space has been created on the Americana shelves for Marah  fitting  neatly in-between Jesse Malin and Mariachi El Bronx.
The former has  appeared on these pages before (and is probably due another appearance) but the latter haven't. Yet another act that we have to thank/blame George for as he forwarded them in my direction.
Until now I thought that this was the name of the band. Turns out it is and it isn't.
The Bronx are an LA hardcore punk band who  have recorded a number of punk albums alongside some mariachi albums under this pseudonym.
It looks like they have recorded about an equal number of each and I suspect that the mariachi ones are probably the most popular.
This is from the 2009 album Mariachi El Bronx the first of three with the same title.

I'm off now to dig out some Calexico and Flaco Jiminez