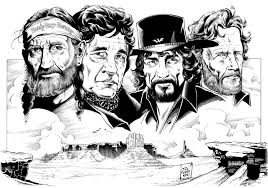 No purchases this time round in Faith, Hope and Charity in Whithorn or the Community Shop or the box of records in the Bookshop in Wigton.
So it was  off to Newton Stewart where I struck lucky in the Sue Ryder Shop.

Now if there was ever a competition to come up with a Country supergroup for the late 80s/early 90's anyone coming up with Willie Nelson, Johnny Cash, Waylon Jennings and Kris Kristofferson would surely be onto a winner.
Appearing together as The Highwaymen they recorded three albums, starred in a film called Stagecoach, provided voice overs for Louis L'Amour stories, toured and generally had a whale of a time.

Waylon Jennings'  ill-health and Johnny Cash's resurrection by Rick Rubin effectively led to their demise. I was going to say the end of their career but it was really just a bunch of old pals getting together for a good time and a laugh.

The Highwaymen - Committed to Parkview

Adam & the Ants - Stand and Deliver
Posted by Charity Chic at 08:00