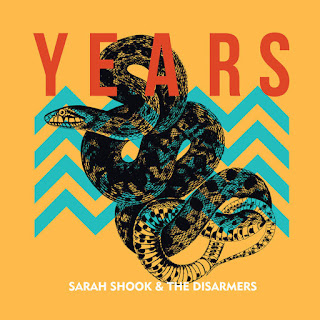 Sarah Shook & the Disarmers  from Chaple Hill, North Carolina are fast becoming my  new favourite insurgent country act.
I was a bit late getting to the table for their April 2017 album Sidelong only getting it at Christmas after hearing The Nail on the Bloodshot 2017 Sampler album.
It was the first Bloodshot album I ever got on vinyl.
I'm glad to say that they are not mucking about with a new album Years having just been released.
Both albums are available on Bandcamp
Also available on Noisetrade is a free download containing a mix of 5 tracks from the two albums.

Here's one from each

Sarah Shook & the Disarmers - New Ways to Fail
Posted by Charity Chic at 08:00