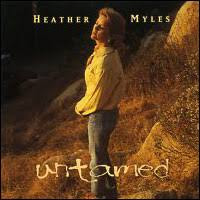 The final holiday purchase features today and it is the obligatory doubler.
I felt I had dodged that bullet with my system to avoid purchasing duplicates from the Blues Collection but obviously not.
I picked up Untamed by Heather Myles in Newton Stewart. Now I knew that I had two of her albums and that one had a picture of her in a cowboy (or cowgirl )shirt and hat - that would be Highways and Honky Tonks
I couldn't remember what the other cover was like. That'll be it above.

The majority of the album is maybe  just a wee bit too mainstream country for my tastes although these two songs with a Patsy Cline type sound to them are pretty good.The first is one of her own compositions and the second is a cover of a Marty Robbins song.
She has released five albums in total so I had a 60% chance of avoiding a doubler. Needless to say I failed miserably.
Not to be confused with the former Lady McCartney

Heather Myles - When You Walked Out On Me

Heather Myles - Begging To You
Posted by Charity Chic at 08:00