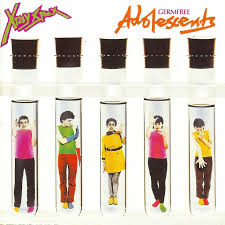 I'm still going through a bit of a bis phase after having seen them last week.
I purchased Social Dancing their second studio alum from 1999. It is a 2014 re-release which comes with a bonus disc.
On the bonus disc they do  a decent cover of  the X-Ray Spex song Germ Free Adolescents.
You can see the influence X Ray Spex had on them with similarities in the music  and in the vocal styles of Manda Rin and the late great Poly Styrene.

I thought that I had previously featured the original but it seems not. So here it is together with Identity.
Terrific stuff.