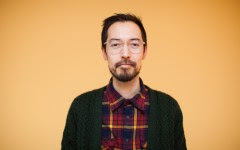 For a wee change today here is some new music and some new to me music from Glasgow based artists.

A. Wesley Chung is from California but has sensibly relocated to the Dear Green Place.He has previously recorded as The Great Albatross and as part of indie folk collective Boris Smile.
Restless is the first single from his album Neon Coast which is scheduled to be released by Glasgow's LP Records later in the year.
It is  rather good.

Prior to Carla J Easton's gig at Nice and Sleazys last week I featured an acoustic piano version of her  single Lights in the Dark.

The version on the night and all the other mainly new songs featured by her and her band was accompanied by her very own Wall of Sound and it was indeed a splendid racket.
The first band up Bite were four youg guys who put on a good show with vocals reminiscent of Television and the Fall.

Next up were West Princes who were excellent. All jingly jangly guitars reminiscent of the Bhundu Boys and Sacred Paws with a slight folk slant to them..
The only song of theirs that I have been able to track down is the single Wet Bark is a Slug which was a Record Day release last year.
A band I would certainly like to hear more of.