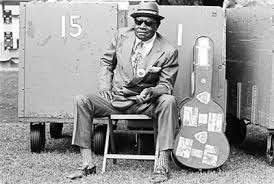 Mrs CC selected Parchman Farm Blues by Bukka White from the Blues Collection (number 23) as a random choice to play at the weekend.
A quick check advises that this is one of the few from the series which has still to feature so here goes.
Bukka was a Mississippi Blues man christened Booker T Washington White after the civil rights activist, Bukka being the phonetic spelling of Booker.
He was a cousin of  BB King's mother , claimed to have met Charlie Patton and had Memphis Minnie on backing vocals on some of his earlier recordings. So a good pedigree then.
He spent time in prison which is also a good pedigree for a Blues man recording for folklorist Alan Lomax whilst in the Mississippi State Penitentiary colloquially know as Parchman Farm.

These song are recorded in Chicago on 7th March 1940.He enjoyed a degree of fame in the 60s when he was feted by the likes of Bob Dylan and John Fahey.
He died in Memphis in 1977 aged either 67 or 70. As is often the case with the old Blues men there is some debate as to his actual date of birth