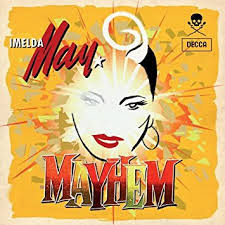 No, not a comment on our Prime Minister and the state of the country although it  could have  been given Brexit and the Windrush fiasco.
Rather, it is a return of a CCM tradition of playing some Imelda May on the 1st day of the month of May. Hardly original but there you go.
One from her 2008 album Love Tattoo when she shot to prominence after an appearance on the Jools Holland show.
This is followed up be her cover of Tainted Love from her next album from 2010 Mayhem.
She has fallen off my radar in recent years perhaps as a  result of a move from rockabilly, following her divorce from band member Darrell Higham , to a more soft rock and acoustic sound having received guidance from Bono no less for her latest album Life Love Flesh Blood.

Imelda May - Tainted Love
Posted by Charity Chic at 08:00