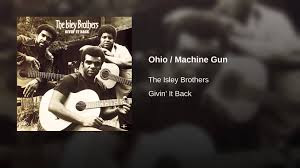 Something fairly stunning for you today.
From the 1971 album Givin' it Back by The Isley Brothers . An album so called after a number of rock stars playing their songs they decided to return the compliment by featuring songs by the likes of Bob Dylan, James Taylor and Stephen Stills.
And then there is this  slab of social commentary weighing in at 9 minutes and 13 seconds starting with Neil Young's Ohio and morphing into Jimi Hendrix' Machine Gun.

You will not hear anything better today