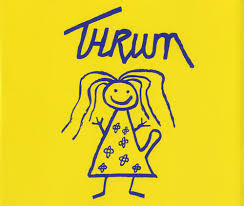 I'm pleased to report that The Gracious Losers were absolutely brilliant when we saw them at the Glad Cafe a couple of weeks ago.
The support act  Glasgow based Country singer Lynnie Carson was also very good.
There were at least nine members of the Gracious Losers on stage with no room for the piano player having to make do with playing off stage and in with the audience.
Chatting to Ian the head honcho from LNFG he pointed out that the three members of Thrum - singer Monica Queen, guitarist Johnny Smillie and drummer Gary Johnston were part of the entourage.

I was not familiar with the name (but had heard Monica before ) so some further exploration was required.
They are from the musical hotspot that is Bellshill (Teenage Fanclub, BMX Bandits, etc,etc ..) and were on the go from 1992 to 1995 reforming on 2011.
I acquired a copy of their 1994 album Rifferama on the Fire Records label which also features Dave McGowan on bass.
It is impressive stuff with a country rock influence.
There was a cut out album review tucked into the sleeve in my copy bought from Discogs (don't  you love it when things like that happens?) which bemoans the fact that their music sounds like Crazy Horse.That's a plus in my book.
It also states that Thrum's unique selling point is Monica Queen's plaintive, occasionally soaring vocal
My new found friend who had taken the trouble to cut out and keep the article has quite rightly written after this just like Maria McKee.
I trus this has whetted your appetite.