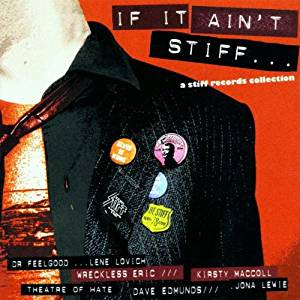 Three songs from the compilation album If It Ain't Stiff ... released in 2001 and as the title suggests A Stiff Records collection.
Two I thought had appeared before (albeit one in a different version) but apparently not and one I know hasn't featured as someone recently pointed out it is by a band who have yet to feature on these pages

Is Vic There? by Department S was  first released by Demon Records in 1980. Stiff followed this up with their own release featuring the French version which is what you are getting today.It puts me in mind of Bill Wyman's Je Suis Un Rockstar!

Theatre of Hate were a band fronted by Kirk Brandon before he went on to Spear of Destiny. A band probably only remembered for  the great Do You Believe in the Westworld?

I have never featured Dr Feelgood before. Sorry about that. The reason? I don't currently have any of their records. Shocking but there you are. Here is a live version of Milk & Alcohol written by Nick Lowe and John Mayo the guy who replaced Wilco Johnson in the band and the man responsible for the classic guitar riff.

Theatre of Hate -Do You Believe in the Westworld?