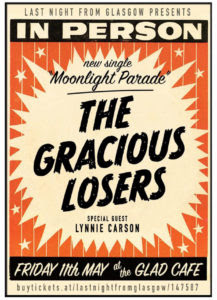 We are off to see The Gracious Losers  tonight in the Glad Cafe in Shawlands as part of the Southside Fringe Festival.
They are yet another band from the Last Night From Glasgow stable and this event also launches their second single Moonlight Parade.
They are a 9 piece band led by Jonathan Lilley who also is part of Sister John and also feature members who have played with Thrum, God Help the Girl and the Parsonage. In short a Glasgow super collaborative.

I am looking forward to a return visit to the Glad Cafe. It is probably the nearest music venue to our house but we have only been once before to see Eleanor McEvoy.

From the little I have heard  they have a rootsy country feel about them and I am eagerly awaiting the release of their debut album The Last of the Gracious Losers which is scheduled for the end of August.

Here is the debut single Where the River Meets the Sea.