Paris in the Spring 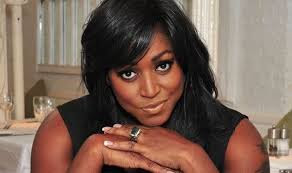 What's the score with the weather? 18 inches of snow at the end of February followed by a  Highland heat wave.
I would be worried had Donald Trump not reassured me that climate change was just a myth perpetuated by the Chinese.

Onto the music.I was putting Shuggie Otis back on the Soul shelves the other day when I noticed that The Best of Mica Paris was it's immediate neighbour. This coupled with a mention of her name in the paper the other day led to it's third airing since it's purchase at a record library sale for 20p a few years back.
And it's just the thing for these hot sultry nights. Some nice relaxed easy listening  gentle soul by the UK's Anita Baker (according to the blurb on the inner sleeve).

Here's a couple from her 1989 debut album So Good. I thought that Like Dreamers Do was her big hit but no, Her debut single My One Temptation was the only one to trouble the top 10 peaking at 7

Mica Paris - My One Temptation

Mica Paris -So Good
Posted by Charity Chic at 08:00