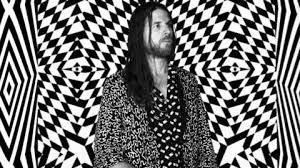 I picked up the latest Mojo at Asda in Girvan for some holiday reading. The accompanying CD The Mojo Machine Turns You On 2018 features 15 tracks about half of which for me pass muster.

There were a couple which have a Laurel Canyon feel about them and as I am a fan of music from that area and era I thought that these were the ones that I should share with you good people.

First up is Jonathan Wilson. Details of his new album Rare Birds have been popping up in my in-box but I have been by and large ignoring them as he looks a bit of a hippy and he also has associations with Father John Misty who somewhat annoys me. Pretty irrational granted but there you go.
However on the basis of the wonderful There's a  Light I may have to ditch my prejudices and dig a little deeper.
The other number with shades of Californian country rock comes from Canadian cousins Kacy Anderson and Clayton Linthicum who given Clayton's surname sensibly record under their first names,This track is taken from their album The Siren's Song produced by the great Jeff Tweedy.Again more exploration is required.