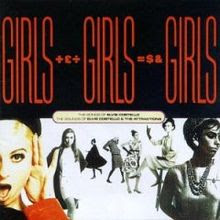 I had an urge to post Indoor Fireworks by Elvis Costello after hearing it on the radio. I was trawling my files for an MP3 of Fireworks by Ette to accompany it when I stumbled across a folder entitled Girls Sing Costello.
I've no idea where it came from and if it actually an album but it is covers of 22 Elvis songs by female artists. So Elvis has been put on hold today for the tribute acts.

Let's start with Laura Cantrell and her version of Indoor Fireworks. Absolutely beautiful as you would expect.
Remember Tasmin Archer of Sleeping Satellite fame? Yup, but can you remember any other songs by her? Nope. Well here is her version of Deep Dark Truthful Mirror.
Psycho is not a Costello composition. It was written by Leon Payne and originally recorded in 1974 by country singer Jack Kittel.
Costello's memorable live version found it's way onto the bonus tracks of 1994's version of Almost Blue.
Today we feature a credible version by Sweden's A Camp.