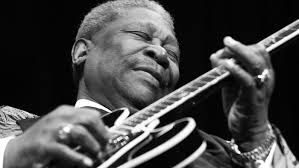 The second of the  three Blues Collection CDs which Mrs CC recently acquired for me is by B.B. King and is imaginatively entitled The King of the Blues - do you see what they did there?
Number 2 in the series after John Lee Hooker at number 1 so they were getting a number of the big hitters out the way when the series was still fresh.
I must admit that I find the majority of the tracks on the CD to be a bit disappointing given the vast range of material and performances available out there.
If it was your first introduction to the great man you might not go back for a second bite of the cherry.
A lot of it is at the jazz noodley end of the spectrum which is not really for me and there is an unhealthy dose of misogyny which I suppose is of it's time.
It is however partly redeemed by a couple of numbers where he and his trusty guitar Lucille actually get down to playing the Blues