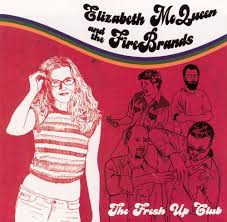 Austin based band Elizabeth McQueen & the FireBrands have featured on these pages a couple of times before with tracks from their pub rock tribute album Happy Doing What We're Doing
It is quite interesting to hear an American band paying tribute to the likes of Graham Parker, Rockpile, Dr Feelgood and Eggs Over Easy. Oh, and yet another female  fronted act covering Elvis with a version of Almost Blue.

On the back of that one I sought out their previous and debut album from 2004 The Fresh Up Club. A touch of pub rock here and there but more of a honky- tonk feel to it with the main subjects being heartbreak and regret.
I would put this one down as pretty average with a couple of reasonable songs in the one's posted below. The second one is co-written by  the great Robbie Fulks who knows his country music.

Elizabeth McQueen & the FireBrands - You Shouldn't Have
Posted by Charity Chic at 08:00