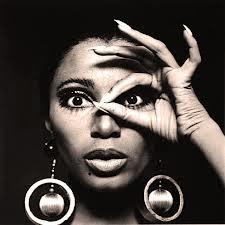 Last Sunday's slab of soul from Irma Thomas out of New Orleans was well received.
Therefore you are getting some more today albeit we are moving up river to Memphis where we are meeting up with Ann Peebles.
Ann produced a number of soul albums in the 70's for the great Hi Records label which at the time was run by Willie Mitchell
Give Me Some Credit is from 1969 and was her second single written by band leader Oliver Sain from her native St Louis who she was performing with she signed for Hi
99 Lbs   from 1971 was written by Hi's leading songwriter Don Bryant who she subsequently married in 1974.
Along with DJ Bernard Miller they are both credited with 1973's I Can't Stand the Rain which was her most commercial hit charting on both the American R&B and pop charts and also the lower reaches of the UK charts

Ann Peebles - Give Me Some Credit

Nothing to see here for a few days as I am off replenishing the batteries and hopefully the music
Posted by Charity Chic at 08:00