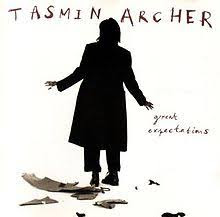 I really enjoyed Tasmin Archer's version of Costello's Deep Dark Truthful Mirror which I posted a couple of weeks ago.
As I mentioned at the time the only other thing of hers I was familiar with was the number 1 single Sleeping Satellite. So when I saw her album Great Expectations in the Cat Protection League in Stranraer I thought I would take a pop.
I nearly didn't bother as the three women behind the counter had gone into a 10 minute collective meltdown trying to code a badge that the customer before me had bought.
Now I wish I hadn't bothered waiting.. She has a fine voice but the album is as bland and anodyne as you are ever likely to hear. It is almost Sheerinesque in it's blandness.
Here is the hit and one of the other three singles from the album which briefly troubled the outer reaches of the charts.

It's going back. Still a few cats got a meal out of it so it is not all bad.

However I wouldn't mind hearing the rest of her Costello covers EP - namely the title track Shipbuilding, New Amsterdam and All Grown Up as well as Deep Dark Truthful Mirror as I think she could be good with the right songs and the right production.