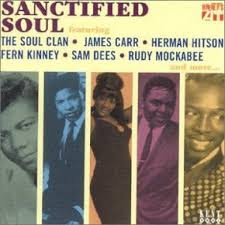 When it comes to putting out great Soul compilations there is no-one better out there than Kent.
I have a good few although obviously not enough.
If pushed I would have to say that my favourite is Sanctified Soul a collection of 26 songs from the Atlantic label and its subsidiaries Atco and Cotillion
The blurb on the back of the CD states
In the 60's rhythm and blues music broke out of the churches and went into the night clubs,on to the radio and permeated throughout black America's soul

There is not a duff track on this album. I've featured it before and no doubt will feature it again. Indeed all 26 tracks would be fit to grace these pages.
Here are tracks by James Carr and Fern Kinney which haven't featured before and one by Don Covay which has but which is too good not to feature again.

James Carr -I'll Put it to You

Fern Kinney - Your Love's Not Reliable

Don Covay & the Goodtimers - I Stole Some Love
Posted by Charity Chic at 08:00