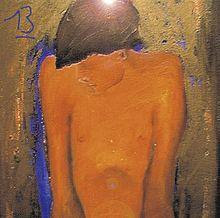 I have had a burn of 13  by Blur for a reasonable length of time and very rarely  play it.
However when I saw a copy of the CD in my local charity shop for 50p the completist in me kicked in..

I obviously  then felt compelled to give it a listen. To me it is a combination of some pretty good pop songs such as the two singles featured below together with the virtually unlistenable such as Bugman.

Released in 1999 when the band were beginning to show the signs of cracking. Strained relationships, the split between Damon Albarn and Justine Frischmann and Graham Coxon's drinking all played their part.
Coxon left shortly thereafter and there was then a hiatus until 2003's Think Tank

They wanted to go in a more electronic direction leading to longtime producer Stephen Street being replaced by William Orbit.

From a completist point of view only The Magic Whip to go. I shall hold out until I can pick it up for 50p!