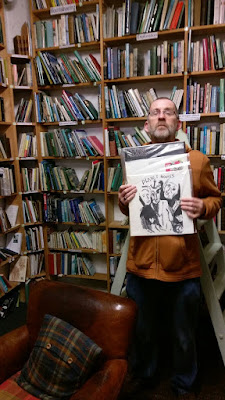 Another slightly more glaikit picture of your humble author showing off his booty acquired recently in The Bookshop in Wigtown
If you blow up the picture (which may not be a bad idea) the more observant will note that the album nearest my chin is by the Violent Femmes.
It is in fact Hallowed Ground their second album from 1984.
A band I am not hugely familiar with. I know that their self titled debut album, and in particular the song Blister in the Sun, is very highly regarded round these parts.
The only other song I knew was the first song on the album Country Death Song which has previously featured here as it was included on the Rough.Trade Country 1 compilation

I like this album but first time out it only lasted a couple of songs before Mrs CC demanded that I turned it off. No such problems with the third album which will appear sometime next week